I visited the “new” UL Student Union for the first time today, and it’s a little different from the original.

This is going back a few years, but when I attended USL, the Union was a place to study, eat, shop, catch a movie, or just gather and hang out with friends. The new Student Union is still all of those things, it’s just much quieter.

Lower ceilings, more modern construction materials, less “open” spaces, and less foot traffic, from what  I saw, seem to be the reasons the new Student Union has less of a cacophony feel.

I did not venture upstairs on this visit (the free parking was limited to 30 minutes and, well, I’m cheap, ok?), but on my next visit I’ll climb up there and check it out.

On the first floor, almost throughout the Union, there’s a chance you’ll be able to get a glimpse of Cypress Lake which, for me, has a calming effect. The Ragin’ Cajuns Store (what we used to call the   University Bookstore) is chocked full of great UL-logoed apparel, housewares, souvenirs and other items you didn’t know you needed. The Cajun Café appeared to be serving up breakfast (I visited at the cusp of the dreaded “are you guys serving lunch yet” timeframe) as I saw a gentleman readily handling a plate of scrambled eggs and a short stack. The University Post Office, a Starbucks, the Bayou Bijou theatre, the UL Cashier’s office, Student Government Association and the Student Union Administration offices are all on the first floor, among others (again, the parking was free, ok? I didn’t have time to look at everything!).

One thing that I remember from the first floor in the “old” union was a room that had a television and rows of seating.  It reminded me a little of a bus station (don’t ask me why, doctors are still trying to figure out how some thoughts enter my brain), and, for the life of me, I can’t remember what was airing on that television. It was something that I could not get at home. Was it MTV? Was it old movies? Was it old cartoons? IIRC, whatever was airing was edgy and funny. Was it “The Golden Girls”? (I’m just kidding with that last one.)

Here's a shot of the "old" Student Union. (Flickr/bayoudragonfly) 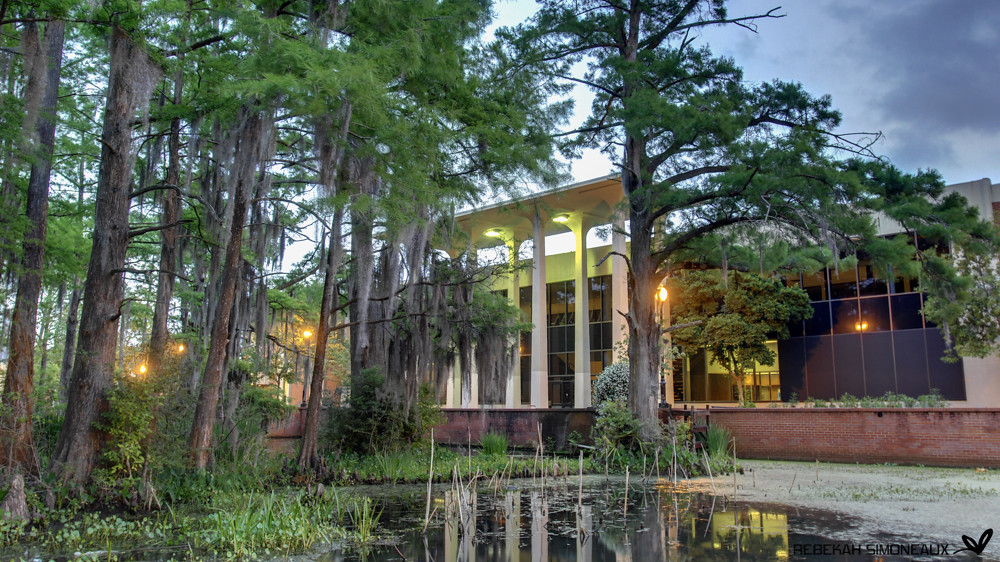 One of the biggest differences, of course, was the smell. When one would walk into the old union via McKinley Street, the cafeteria was immediately to the left, and those smells hit you first. As you walked down the hall, the bookstore was on the right, so you had that aroma. And then, throughout the rest of the building one could smell the halls and walls that had lived through dozens of years of use by several students who were either a) sprayed down with enough Calvin Klein’s “Obsession” to fuel the Space Shuttle or b) not yet aware of the pleasures of warm water and soap cascading down one’s body. At all. Ever. All of those olfactory stimulants made for quite a unique atmosphere.

I am not yet at the “Hey, you kids! GET OFF OF MY LAWN!!” age, but I do have fond memories of the “old” USL Student Union. I am, though, at the age of appreciating new, clean, fresh, convenient, and technologically-advanced spaces.

Speaking of technologically-advanced, do you remember the bank of pay phones in the old Union? One of my favorite memories of those pay phones was watching non-native students sitting near the phones, awaiting calls from home. When a phone would ring, someone would answer and, if it wasn’t their call, they’d call for the name of the person the calling party requested. Once on the phone, the students would usually speak in their native tongue to their friends/family, often times with tears in their eyes.

Filed Under: ragin cajuns, ul
Categories: Lafayette
Comments
Leave A Comment
Back To Top
CJ And Jenn's Everything You Need To Know For February 28